Lou Ros, 26, began painting at the age of 17. He started doing graffiti for fun with friends on the walls of buildings. But this game soon became a real addiction to him. Subsequently, the fast and spontaneous simple tag that he performed gave way to more sophisticated and substantial works like murals. Learning to paint on the job without going through art schools, Lou soon feels the limits of this street art, admitting himself that “there is an ethics of aesthetic beauty and repetition that eventually bores me. Painting beautiful is boring, while making a painting that has strength is quite another thing.

So I started painting at home. ” Back home, he enriches his reasoning and his practice of painting by privileging an attitude of truth and a more fundamental quest to his painting, “The living and vibrant line instead of nice clean straight line.” With his drawings of dancers, his mother being a choreographer, Lou was able to exercise his talent in delivering a message and lyrical poetry of great subtlety. On this occasion, he developed an aesthetic wealth by restoring the strength and attitudes of expressive dance. 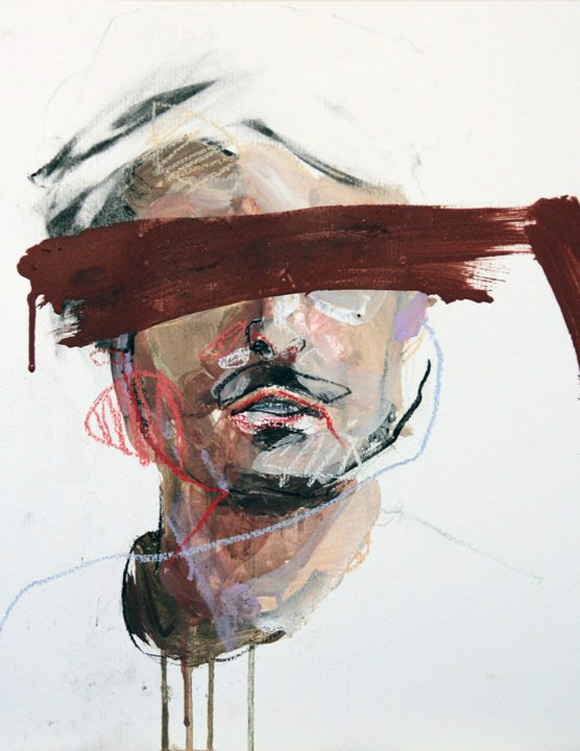 The light, thin, stealthy and evocative lines allow him to describe the figures and shapes of the dancers. Movements of steps and changing positions are reconstructed with an edifying accuracy. One can have the impression of watching a live choreography. The gesture is often beautiful and elegant, and a certain gracefulness appears in these works though in draft form. Besides, the unfinished nature of the sketch gives the opportunity for our imagination to continue the magic of dance.

Further on in his choreography paintings, the appearance of the incomplete form takes another dimension, like the peculiar art of this painter who defies categorization. His paintings are representations of the visible world and his own inner world. With his magic paintbrush, colors fly, dance and rejoice with pleasure and passion marrying all developments and contortions of the dancer. In this pictorial choreography, there is an explosive, radiant and vibrant dramatization of colors.

One can sense the legacy of Cubism in the shapes, and the automatic writing of the surrealists … sometimes leaving the unconscious expressing itself. This particular script is reminiscent of other painters such as Franta with his “Ã©criture des corpsâ (Writing of bodies).

The concern that springs powerfully in the works of this young artist is perhaps this same act of knowledge as in Franta’s work : each work becomes a step towards “a future of spiritual maturity? Thus, in these dance paintings, faces are almost nonexistent, scrambled, often confused with enigmatic expressions. The movements and shapes are only what counts… the strangely alone man in his agitation and almost always faceless. 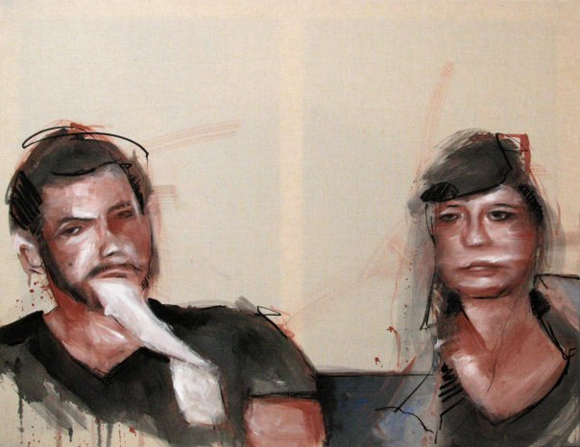 In the series of paintings “Rouge Anglais”, the painter uses the same process. Sometimes a face appears and is often out of frame, as if the artist refused any access or visibility. Moreover, this color called “Rouge Anglais” (english red), which is a synthesis based on earth and other minerals such as red iron oxide joined to ultramarine blue, gives quite a purplish aspect adding a sense of anguish.

In fact through his figures and faces, the artist wants to present the world as he sees it. He’s an uncompromising witness of his era.

His bloody, stained and sad self-portraits, are not ultimately his own. He doesn’t see any suffering (his own) and responds by saying: “Even in school, teachers would say I had a melancholic expression although I was fine. I see more of an anxious wait, some fear of saying too much and impoverishing the image. I paint because I expect something out of it, it’s a never ending research. “

That is why his work is like a parable polysemic pictorial. Lou certainly masters technique. He can decline his painting in an extremely nuanced way, alternating serious (portraits and self portraits) and light (dance) subjects. His approach is neo-Expressionist in its chromaticism and freedom like presenting distorted or torn figures, weeping tears of blood. And what Kafka said about Picasso, one could say the same about Lou Ros works:

“In the distorted mirror of art, the reality appears undeformed”

Text by Christian Schmitt translated in english by Rachel Thomas.